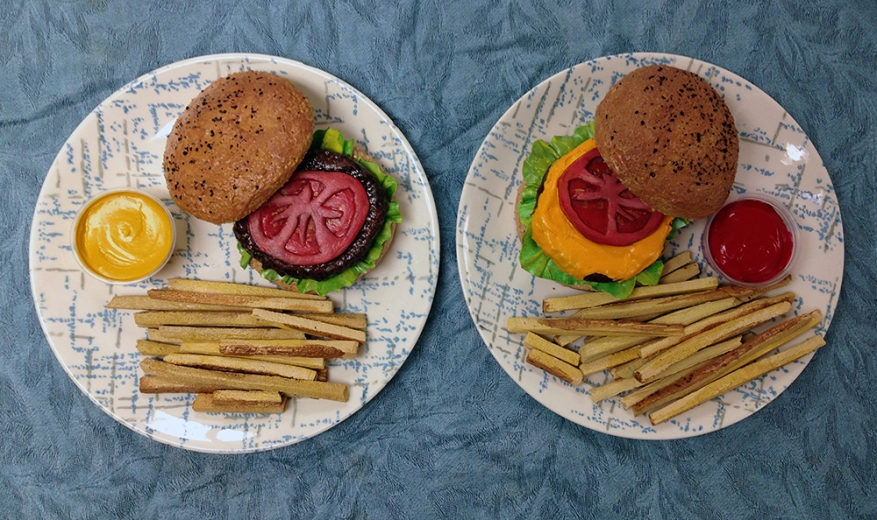 The Buns – Expanding foam was blown into plastic containers, and after cure carved into their basic shape. After 2 light coats of latex, they were painted with acrylics. Sculpt or Coat was used as sealer, and crushed seed beads were sprinkled on top as it dried for poppy seeds.

The Patties – Expanding foam was also used for the patties, but many thick layers of latex were applied to create the proper surface area. The patties were sealed with semi-gloss polyurethane to give them an extra shiny, greasy looking appearance.

The Fries – Rigid insulation foam were cut into strips and coated with Sculpt or Coat to give a painting surface. Each fry was kneaded to take down the square edges. They were sealed with a spray poly after a 4-step paint treatment.

The Cheese – A very thick mixture of Sculpt or Coat and acrylic paint was spread onto wax paper and allowed to dry. Before it was fully cured it was gently laid on the patty. 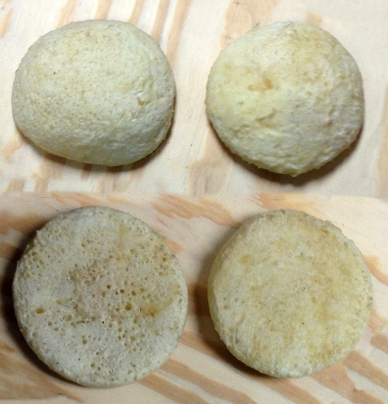 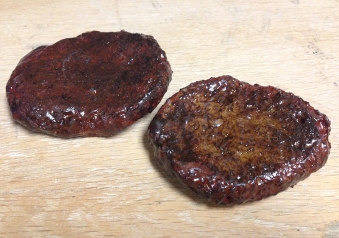 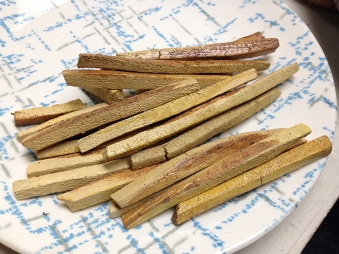 The original clock was most likely several feet tall despite being a wall hanging. I downsized my clock to roughly 27”H x 11″W x 8-1/2″D.

The first thing I made were the spindles. I used rock maple for it’s strength in turning something both narrow and complicated. They measured around 1-1/2” at the widest diameter and stood at around 13” tall.The trunk was constructed from pine, poplar, ply, and some leftover moulding. The height of the trunk wasn’t determined until the spindles were cut to size. The spindle attachment points were left accessible during construction so they could still be removed.

The base was made from planed and shaped scraps of poplar and a wooden finial found in stock. The thick black paint was sanded off, and its detail returned with a dremel. The trunk was assembled after the base was constructed. The screws that held the bottom of the spindles in place were eventually replaced with the dowels used to create the lower finials.

The plinth was created using a base of pine and embellished with scraps of trim moulding, pressed wood appliqués, poplar, oak, and other findings. The plinth and base both had a set of small decorative finials. They were too delicate to lathe, so I used beads, knobs, and other wood findings to create similar shapes. The best shop finding was by far a perfectly sized lion brooch in the Costume Crafts Shop!

The back plate and pendulum insert were left removable so the clock itself and a plexi window could still be accessed for changing the time and cleaning purposes. The pendulum was of poplar and a pressed wood appliqué.  The whole thing was coated in epoxy create a glossy surface for the paint. Small bits of coat hanger wire were brazed to create the fret and epoxied into the top of the pendulum. The source clock had a decorative plate with the model name “Gloria” engraved on it. I found a drawer pull with no mate in stock and shaped it with the dye grinder and  dremel. As an homage, I christened this clock with my own  initials.

Because so many varieties of wood were used, I chose to paint the clock in order to unify the piece. It was sealed with a polycrylic semi-gloss. The clock rim, pendulum, lion pendant, and name plate were all hit with the same gold spray paint and FEV treatment. 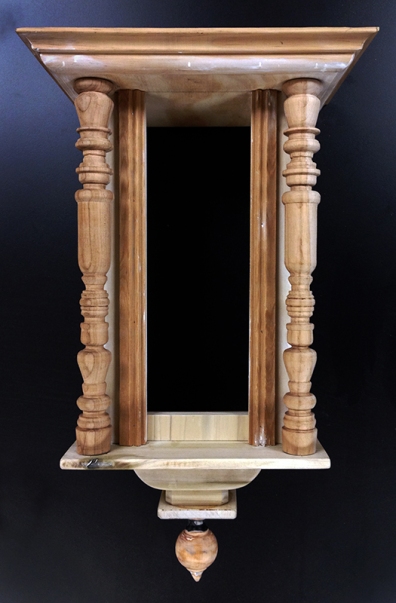 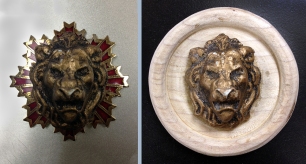 An afternoon project project made with scraps of 3/16″ steel rod, slices of pipe bent in a vice, and other steel scraps. Each key was around 4-1/2″ long. 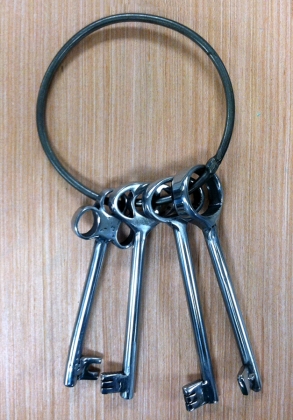 For this class project I challenged myself to be able to not only replicate a particular object, but to be able to duplicate my own work. This meant choosing an object that was essentially a mirror image of itself. The Sphinx’s body was essentially symmetrical except for the placement of the tail. It was also my  intention to challenge myself with carving the human form again. It’s smaller scale (18” L x 10” W x 14” H) added another layer of difficulty for me since all other carving previous to this project were at a life size scale.

I started with 4 layers of rigid insulation foam and carved down from there. I started with a hot knife to take away large chunks of material, and the rest was done with snap knives. I continued to carve the body until I realized I needed more information about the wings. I chose to carve the wings in poplar so they would be more durable. Each wing had a visible front and back side. I used a dremel with a sanding drum to lay in the feathers.

When it came time to insert the wings, I dug two slots into the foam and adhered them with expanding foam. Shrink wrap kept the wings in place until it cured. I also used the expanding foam to add material back where I had carved too much away. Masking tape took care of any additional imperfections. Upholstery tacks created the eyeballs, a bundle of twine was used for the tail, and microcell foam pierced with wires established the flourish in front. The statue was attached to the wooden base with contact adhesive and a thin bead of caulk for security. Sculpt or Coat unified all the surfaces before being painted. 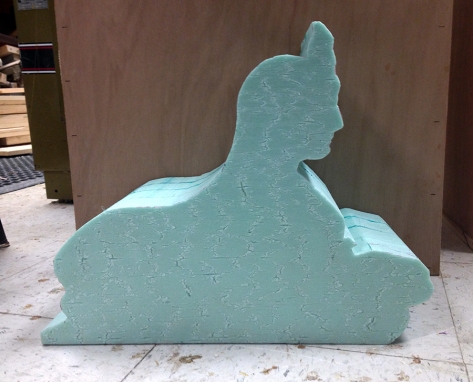 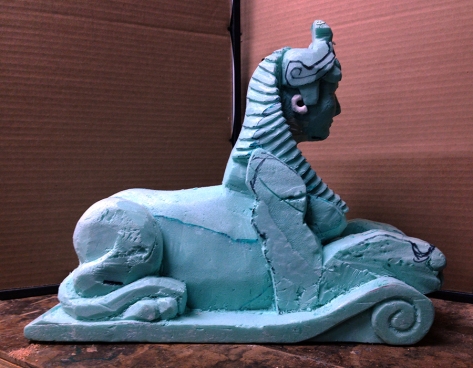 finished except for paint 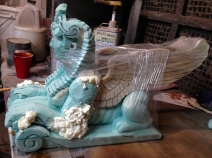 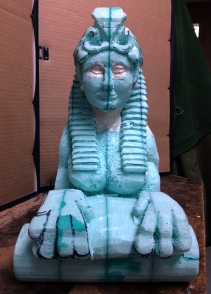 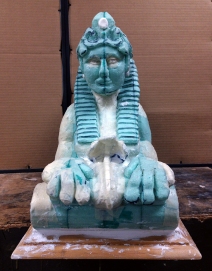 finished except for paint

3/4 view; finished except for paint 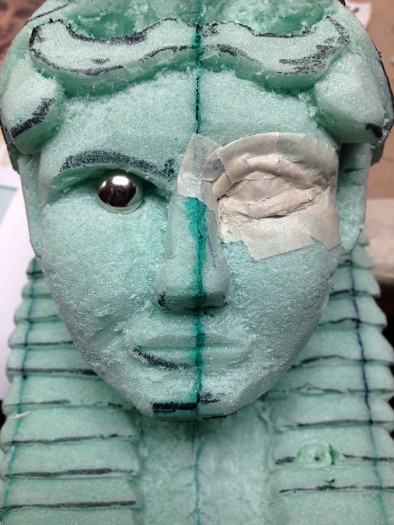 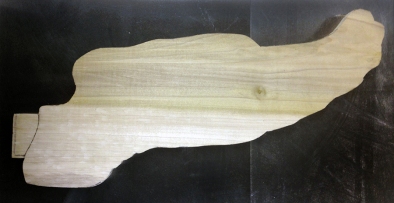 carved front and back

This was a collaborative re-upholstery project. The naked frame was already in stock. First, the legs were re-stained. A new plywood and jute seat was cut and installed. Lauan was stapled to the back and muslin stapled to the sides to serve as a surface to glue batting.

Pattern matching and negotiating the shape of the arms proved the most challenging aspects of this chair. We draped directly onto the frame. My partner concentrated on hand stitching the back while I built the cushion. 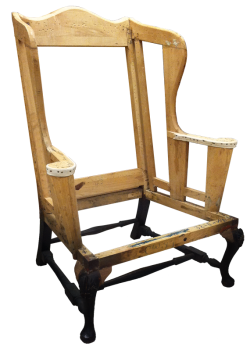 This was a mock-up mask made during a Props & Crafts Techniques taught by Holly Cole for a professional production of a children’s show in Philadelphia.

The process began by taking a stock plaster face cast, and sculpting the fox face out of plasticine. The finished sculpt was then covered with saran wrap, and layered with scotch tape. Pattern lines were drawn in sharpie on the scotch tape and then cut out. These pieces were then used to create the pattern pieces for the Varaform mesh. Seam allowance was added in so the mesh had areas of overlap to create rigidity to the structure.

The sculpt was wrapped in aluminum foil, and the Varaform pattern pieces were draped over it after being softened in a hot water bath. The outer edge of the mask and the eye holes were doubled over to ensure a soft edge.

A wire was wrapped around the mask’s edge for strength. The ears were formed out of Wonderflex draped over a plasticine sculpt of the desired ear shape. The mask was then painted black on the inside, and orange and white on the outside. Fabric, fur, and feather trimmings were applied with hot glue.

Moleskin was placed inside for comfort and a head strap attached to secure the mask to the actor’s head. 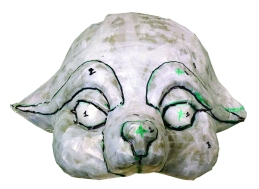 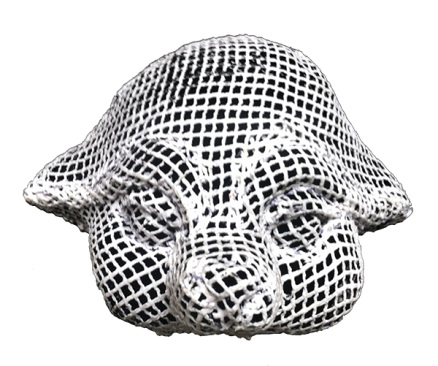 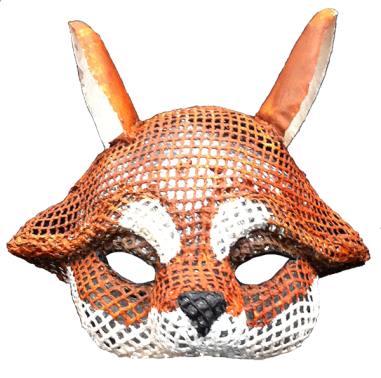 The fish bodies were carved quickly out of chunks of poplar and a piece of luan was epoxied into a notch cut into the poplar. Two of the fish were wrapped in a textured fabric that simulated scales. The fabric was brushed with glue as a sealer against the plaster during the mold making process. The mold was made of Ultracal 30 gypsum cement.

The fish were cast in Smooth-on Dragonskin FX Pro thinned with lighter fluid to ensure that the pour spout did not get clogged with material. Due to the thinning of the material, the set time took a bit longer than the advertised set time of 40 minutes. 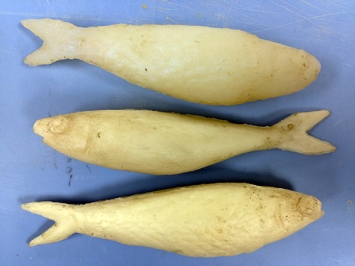 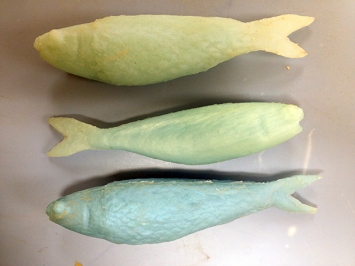 The buckler was cut out of 18g. sheet steel. It went through an initial dishing process, which involved hammering the steel into a shaped wooden stump, and a secondary dishing to create the larger central circle. A 2″ hole was cut out of the buckler and a separate 2” circle was dished and welded to the buckler from the front. All welds were cleaned up.

The whole thing was then planished, polished, and buffed. A pattern was drawn out in Sharpie, and dremeled in with a carbide bit.

The handle was made from a 1” strip of 18” steel cut to shape and bent in a vice. A 1” dowel was split in half and screwed to the metal strap. Brown vinyl was then barged around the dowel. The ends were wire wrapped before the handle was welded to the back of the buckler. 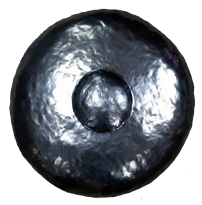 Annealed coat hanger wire was individually hot bent with the oxyacetylene torch and weaved into the knot pattern. The wires for the second knot had to be hot bent in order to weave through the original knot, strand by strand. Brazes kept it tacked in place. Additional coat hanger wires were brazed to the knot pattern to create the necklace. The final product was wrapped with gold wire to hide structural brazes and finished with black FEV.